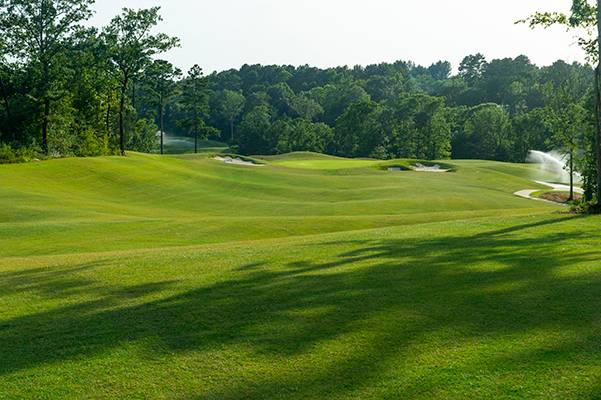 Brauer was hired by owner Joe Bruno, a New Orleans-based attorney. The architect was tasked with proving options for low, medium and high-end renovations.

“The project had over 100 acres of land reserved for residential, off-golf lots,” said Brauer. “I saw the potential to put some great holes up there, with lots looking down, increasing real estate value by millions, but also providing six new holes that all fit the land very well.

Following evaluation of Brauer’s options, Bruno decided to proceed with a high-end renovation. “We decided to go big or go home, since it had to be a great course to draw golfers from surrounding cities such as Houston, Dallas and Shreveport,” said Brauer. “We ended up with a brand new course, with 12 completely rebuilt holes and only six left in their original corridors.”

According to Brauer, one of the unused features of the land was a lake just across the road from the existing course. He created a ‘cape’ tee shot on the eleventh and parallel sixteenth holes. The twelfth is a par three that plays over the steep banked tributary leading into the lake. “Eleven and twelve are usually touted as the signature holes,” said Brauer.

“On the front nine, the old fifteenth is now the sixth. It was a ‘hill and dale’ par five with blind shots and a narrow corridor. We widened it and made cuts of over 30 feet to provide vision from tee to green. The old fourteenth, now the fifth, is an up-and-over par four, which I don’t usually like, but we restored it with a very wide fairway and it is unique in my portfolio.”

The project started in 2015 when hurricanes blew out a dam on the irrigation lake. Brauer said that the main challenge was the constant rain in combination with sandy soils, meaning more drainage to control flows, more erosion protection and a lost season of construction, where it rained nearly all summer. Signet Golf Associates started construction in January 2017, hoping to end in August 2017, but rains delayed them, and they came back to finish in spring and summer 2018.

“The Southern Hills course was called the worst course on the best land by many, including me,” said Brauer. “It totalled 5,800 yards, and had right-angle doglegs, tiny greens and narrow fairways. In fact, where we now have holes ten and eighteen, there used to be three holes jammed into an area just wide enough for two.” The redesign of the course sees five sets of tees ranging from 4,512 yards off the red, to 7,229 off the black.

“The owner was wonderful and has won design awards for his home and office from the American Institute of Architects,” said Brauer. “He loves quality design, so when we encountered a problem, he supported the best solution. Two examples are the fourth and eighth holes, which both cost him premium real estate. The old thirteenth – now hole four – was an average par three along a creek, but we walked up the hill to what was then a lot, showed him how much better it would be as a drop-shot par three, and he agreed. Our originally proposed hole eight was a short par four. He allowed us to put the green across the creek, turning it into a 450-yard par four, which also is your first vision of the course driving up the highway.”

Brauer enjoyed the project at Tempest, especially the total involvement he had in the site planning. “We lowered the parking lot by 15 feet to avoid the originally steep walk in – and land planning and some landscape architecture made it a dream project.

“I also like the name – Tempest is so much different than the typical golf course name, a la, the original – but not original – name of Southern Hills. No need to worry, the course doesn’t reflect the name. The slope ratings just came in and they are slightly lower than my typical course: 130 tips, 125 blue and 120 whites.

“The yardage splits reflect my belief that we have overdesigned for one percent of players, inadvertently making courses too long for average and senior men and women. Thus, blue, white, gold and red are all a bit shorter than I might have made them 10 years ago. I have been playing 6,000-6,100 yards for a few years now, and golf is fun when you hit greens with mid irons!”

The clubhouse has been completely redone on the inside and now has a 1,600 square-foot banquet addition.

The club is scheduled to open on 28 September. Over 100 people have signed up, with about 50 being original members of the club.