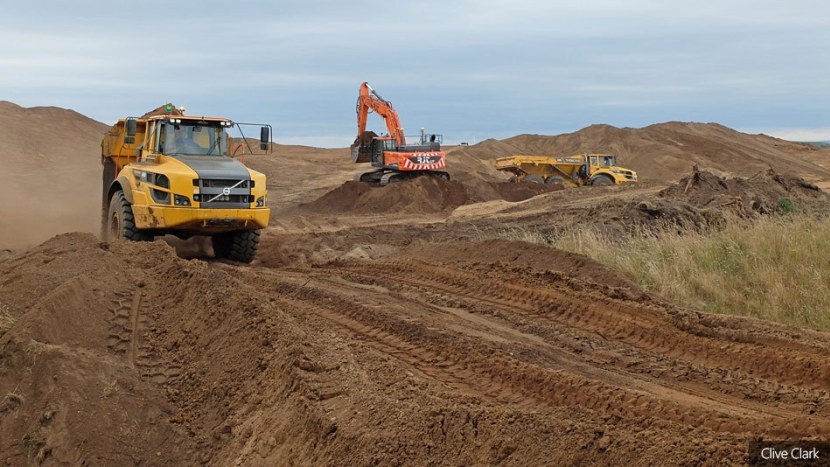 Construction is moving fast at the new Dumbarnie Links course at Lower Largo on the south coast of Fife in Scotland. Less than two months after mobilising on site, the crew from American contractor Landscapes Unlimited, led by golf architect and former BBC TV commentator Clive Clark, with project management being provided by Scottish architect Paul Kimber, has shaped seven holes, and is almost ready to begin installing irrigation. Clark also assembled the consortium of fourteen investors that is backing the course (which includes Landscapes).

Located ten miles from St Andrews, the course occupies land belonging to the 5,000-acre Balcarres Estate. The site has more elevation than is commonplace on most links courses, with several holes occupying an escarpment some sixty feet above the coastline, resulting in thirteen holes having a view over the Firth of Forth.

GCA paid a visit to Dumbarnie during Open Championship week, to be greeted with a hive of activity, both from the main construction crew, and the bunker crew from synthetic bunker edging specialist EcoBunker. The EcoBunker crew, led by global installation specialist Llewelyn Matthews, is moving through the property behind the shaping crew and constructing the revetted bunkers. Not all the bunkers will feature revet though; architect Clark has planned in a number of large sandy blowouts.

“The par five fifteenth has twin fairways, the straight line is more dangerous as it is only 30 yards wide, while the left fairway, which is split from the right-hand fairway by couple of large bunkers, is 50 yards wide,” he said. “There is also a short par four at seventeen, around the 300 yards, and that has an old Scottish wall en route to the green.”

At the lower level, the golf course site runs alongside, but does not go into the Dumbarnie Links site of special scientific interest (SSSI). “The coastal level is the larger part of the site, but the dunes there are fairly low, which allows us to see over them,” said Clark. “Up the escarpment and when you’re high above the coastal plain, we have three of four holes where the view is getting on for 180 degrees which is quite spectacular.

“The material onsite is ideal, and we moved quite a lot of dirt to accomplish high dunes – the bigger ones are in step with Birkdale,” said Clark. “The earth move will finish in five to six weeks, and we hope to have construction finished by the end of the year. It is a tight schedule, but we are on target, which will allow a full eighteen months for the course to grow in before opening in 2020.

EcoBunker CEO Richard Allen said: “New links courses are extremely rare, and we are very proud and happy to be playing a major role in the construction of Dumbarnie, which promises to be an outstanding golf course that will attract play from all over the world. This is one of our largest ever projects, and we are very pleased to be working so closely with Paul Kimber and the Landscapes Unlimited team to make Dumbarnie a true destination links.”